How to Identify and Root Out Assumptions That Keep You Stuck

How to Identify and Root Out Assumptions That Keep You Stuck

Question orthodoxies and reframe flawed assumptions that rule your business

Assumptions are beliefs we take for granted and accept as true. Most of our assumptions are unconscious — and for good reason. We would be terribly inefficient in mundane day-to-day decision-making if we questioned every assumption.

“Living a human life is a philosophical endeavour. Every thought we have, every decision we make, and every act we perform is based upon philosophical assumptions so numerous we couldn’t possibly list them all.” — George Lakoff · Mark Johnson

However, when assumptions in the workplace become embedded as orthodoxies (generally accepted rules and beliefs that demand conformity about how things are done) you have an innovation killer you must address. As Rear Admiral Grace Murray Hopper remarked in an Information Week interview (1987):

“The most damaging phrase in the language is “We’ve always done it this way!”

Michael Hammer renowned for his book on Reengineering the Corporation, advised, “Zero in on the assumption that interferes with achieving a strategic goal, and then figure out how to get rid of it.” You can root out orthodoxies by identifying existing assumptions and overturning them to illuminate blind spots or limiting beliefs to look at your problem in a new way.

One of my favourite examples comes from Alan Robinson (co-author of Corporate Creativity). He described how KC Fine Furniture trained delivery drivers in interior decoration so that when they deliver furniture to the customer, they help arrange the room, and accessorize. As a result, their rejection rate dropped from 10% (the industry standard) to 1%. Who would have thought of training a truck driver to be a decorator?

When Edward Jenner reversed his framing question from why do people get smallpox, to why dairymaids apparently do not, he discovered that harmless cowpox gave protection against deadly smallpox. He created a vaccine that helped eradicate smallpox as a scourge in the western world.

When Albert Sloan was president of General Motors in 1923, he pioneered the concept of instalment planning for car dealers, reversing the assumption that customers had to pay for a car before driving it. Now we can drive the car out of the lot first, then pay, and pay, and pay!

Related: Spark Creativity in Your Team by Question-Storming Before Problem-Solving

The assumption reversal technique is one of the most popular activities in my creativity and innovation workshops. I learned about it when I was co-authoring Orchestrating Collaboration with Arthur VanGundy, who kept pointing out assumptions I didn’t even notice I was making. I jokingly named him my Chief Assumption Officer, because I could see how assumptions create barriers to creativity. The technique VanGundy advocated was invented by Stephen R Grossman, former head of New Product Research for Scott Paper.

Assume you are a banker and want to attract new customers. You might list the following assumptions:

Next, reverse these assumptions as shown in the following examples:

Finally, use these reversals to suggest ideas:

Vangundy notes that some problem assumptions are extremely basic and fundamental while others may be more abstract. For instance, “a basic assumption of a problem involving attracting new bank customers would be that the customers have money to invest. A more abstract assumption might be that customers put their money in banks primarily to satisfy their needs for security.”  Either type of assumption is appropriate for this exercise. Source 101 Activities for Teaching Creativity and Problem Solving. (VanGundy 2005)

What assumptions do you need to reframe?

As founder of Creativity Work, I help executives and their teams develop creativity, innovation, and leadership skills via arts-based learning and design thinking.(As an Amazon Associate I earn from qualifying purchases on blog posts)

New! A Course in Creative Resilience for Teams 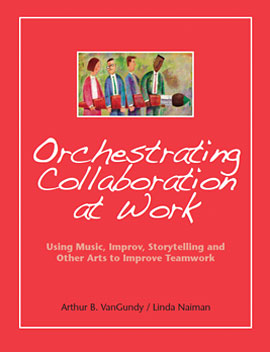